Wingate is a shallow water gas field located in Block 44/24b of the British Continental Shelf in the southern North Sea. The field is situated approximately 110 miles (177km) from the UK coastline and about 6.5 miles (10.5km) west of the British / Dutch median line. The field was brought on stream in October 2011.

Based on a structural interpretation of the available PSDM seismic volume, the drilling of two additional exploration wells was in progress and WEB-AVO was deployed to de-risk the potential target sands. Inversion of the pre-stack gathers revealed the target zone to be highly compressible when compared to neighbouring lithofacies. This result was interpreted to be indicative of the presence of a good porosity sand and/or the presence of hydrocarbons. The seismic used in this project was shot in the 1990’s with acquisition design not optimised for pre-stack inversion and data quality excluded reliable recovery of a second elastic parameter. Consequently, it was not possible to separate lithology from fluid effects but compressibility alone is already an excellent reservoir indicator and gave confidence to continue with the planned drilling.

Wireline logging over the reservoir interval eventually confirmed the prediction of WEB-AVO by two blind-tests, namely the presence of good reservoir quality sands. Although not directly inferable from compressibility alone, production tests verified the accumulation of commercial gas. 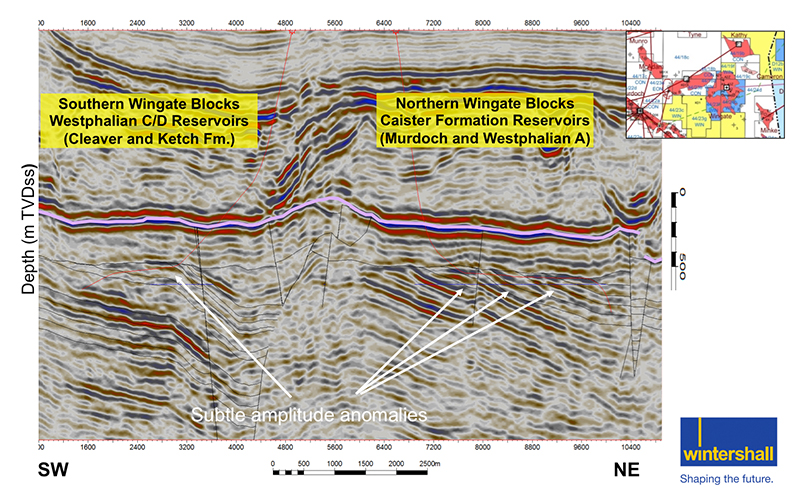 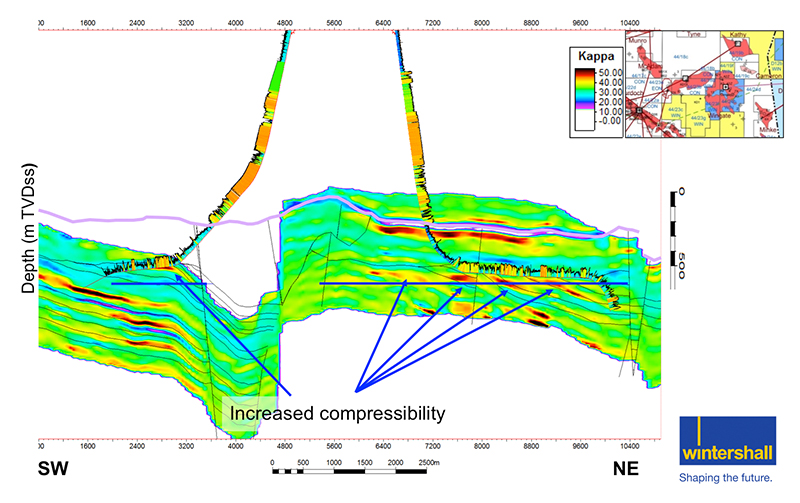 An arbitrary line through the Wingate prospect, intersecting the two planned well trajectories. A full stack of PSDM seismic data was used for structural interpretation and the inverted compressibility helped to de-risk the prospect by confirming the expected presence of good reservoir quality gas sands. The inversion result was confirmed by two blind tests that were drilled and logged after the inversion project was concluded and handed over to the client.